How much does a Pair of Eye Glasses Costs for People at the Last Mile?

Vision impairment due to lack of access to eye glasses has been identified as one of the largest unaddressed disabilities in the world. There are many remote villages, where getting a pair of eye glasses is a distant dream for many. With a pair of glasses costing pittance, 550 million people in India are still in dark. Whereas, there are other parts of the world, where the first reading eye glasses can be picked up easily from a grocery store or a pharmacy.

Of all the eye problems, the commonest eye problem results mainly due to refractive error causing hyperopia, presbyopia, or myopia, and which can be easily corrected using eyeglasses. Refractive error is a condition where a person is unable to focus clearly on an object. Above the mentioned problem, Presbyopia is the most easy to correct just by trying out different corrective glasses. But, quite apart, such diseases remain largely untreated. Vision impairment is more than just a health disorder. It has economic, social and public safety implications and with variety of approaches tried and tested, to date none have succeeded on a larger scale. 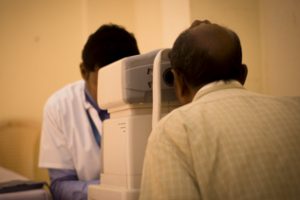 With the mission to bring eye glasses to all who need them, iKure has potentially paved the way for a new beginning in dissolute communities. With access to simple pair of spectacles, the venture has drastically improved earning power, educational prospects, and enabling every day task easier. Post intervention, our beneficiaries have reported to feel motivated with positive social and economic outcomes, better learning behavior and even fewer road accidents. So far, iKure through its eye care initiative has helped more than 0.5 million people get access to corrective eyeglasses.

Another approach initiated by iKure includes access to power testing using state-of-art technology. The use of advanced technology has facilitated getting corrective eye glasses with reduced chances of manual error, bringing ease of using among the end-users.

While the problem too large to scale, but simple enough to solve, we look forward to working with partners and Govt. initiatives to bring the first pair of eyeglasses needing them.